Dress for the respect you want.   Surround yourself with the comfort you deserve.   Sewing Chaos
— advertisement

Sewing Chaos caters to magic users from across the Andisol Valley and even around the world. While they carry clothing for practically every occasion and even dedicate an entire branch of their business to custom orders they are best known for their lines of stylish wear crafted for magic casters, complete with built in safety features. If one wishes to dress in protective gear or magic-shielded armor without wishing to appear as of they are wearing personal protective equipment, Sewing Chaos is the first place to look. 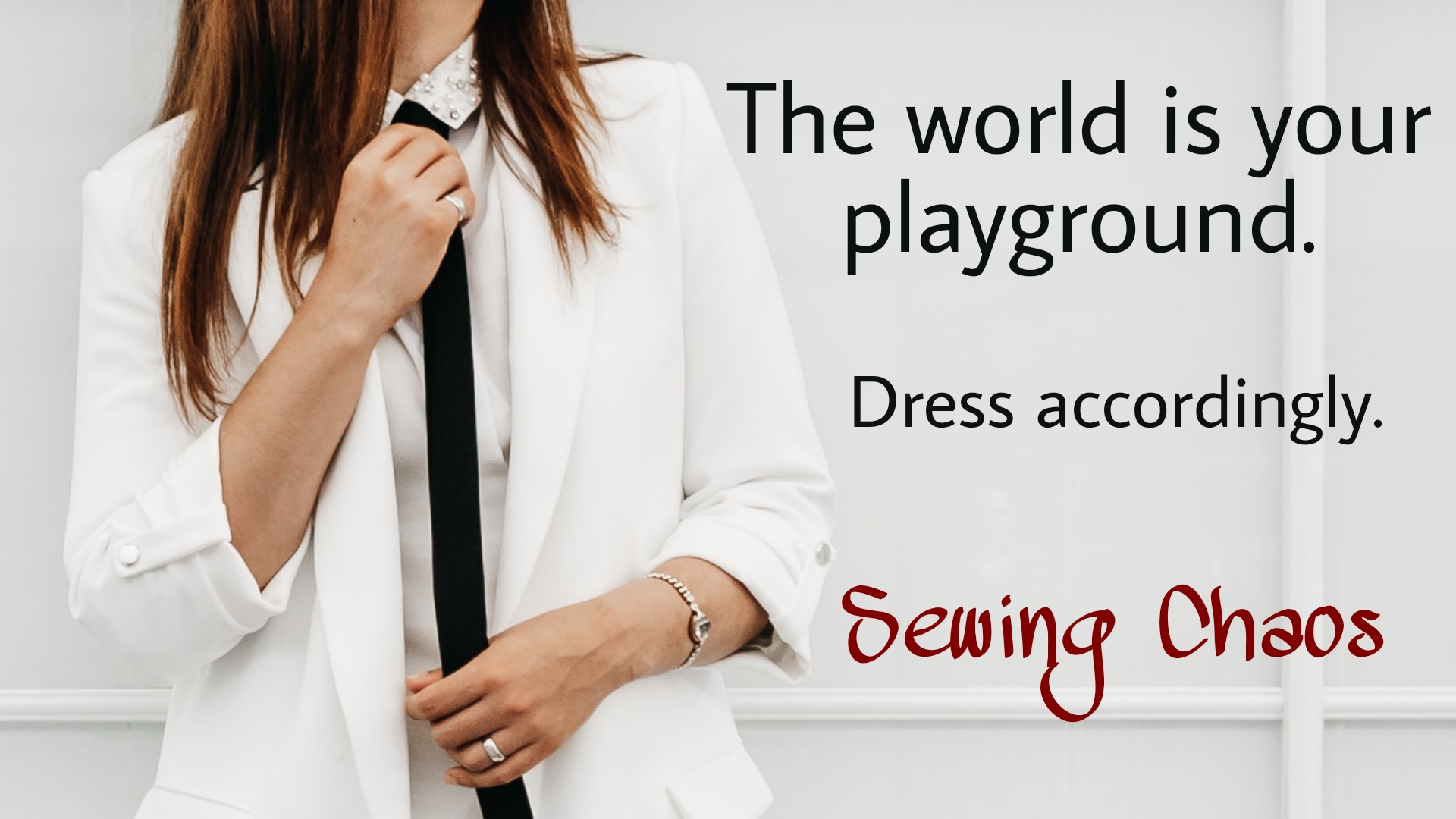 woman in white blazer and white pants by Bruno Emmanuelle (modified by Angela Biscup)
There are many ways to craft deceptively protective clothing, and Sewing Chaos has proven expertise with all of them. Threadmancy remains the best known, allowing for the use of exotic materials and infusing them with greater strength. Some clothing even utilizes thin strands of metal for both additional strength and aesthetics. Fabrics selected for use in their clothing are surprisingly comfortable and flexible, with many able to at least partially deflect slash attacks and lessen the impact of piercing blows solely from the strength of the fabrics themselves.   These protections are standard in all products from Sewing Chaos, as a matter of principle. Quality standards will not allow them to market clothing that could rip or cut easily, or stockings that could run from the mere scrape of a fingernail. This does make the fabric itself more difficult to work with when cutting into shape or sewing the pieces together, but their quality is worth the price to their clientele.   Chronomancy remains a key component of their successful quality, as well. Colors are magically infused into the fabrics, leading to colorfast fabrics that do not run or fade regardless of their exposures to staining agents or repeated trips through the hydromatic. Some higher end products even shift colors, depending upon the light or the wearer's mood or even predetermined patterns set into the hemlines via Rune Magic. These items do require periodic maintenance to maintain the effects, due to the channeled nature of the colorshifting spellwork, unlike the majority of clothing offered by Sewing Chaos. 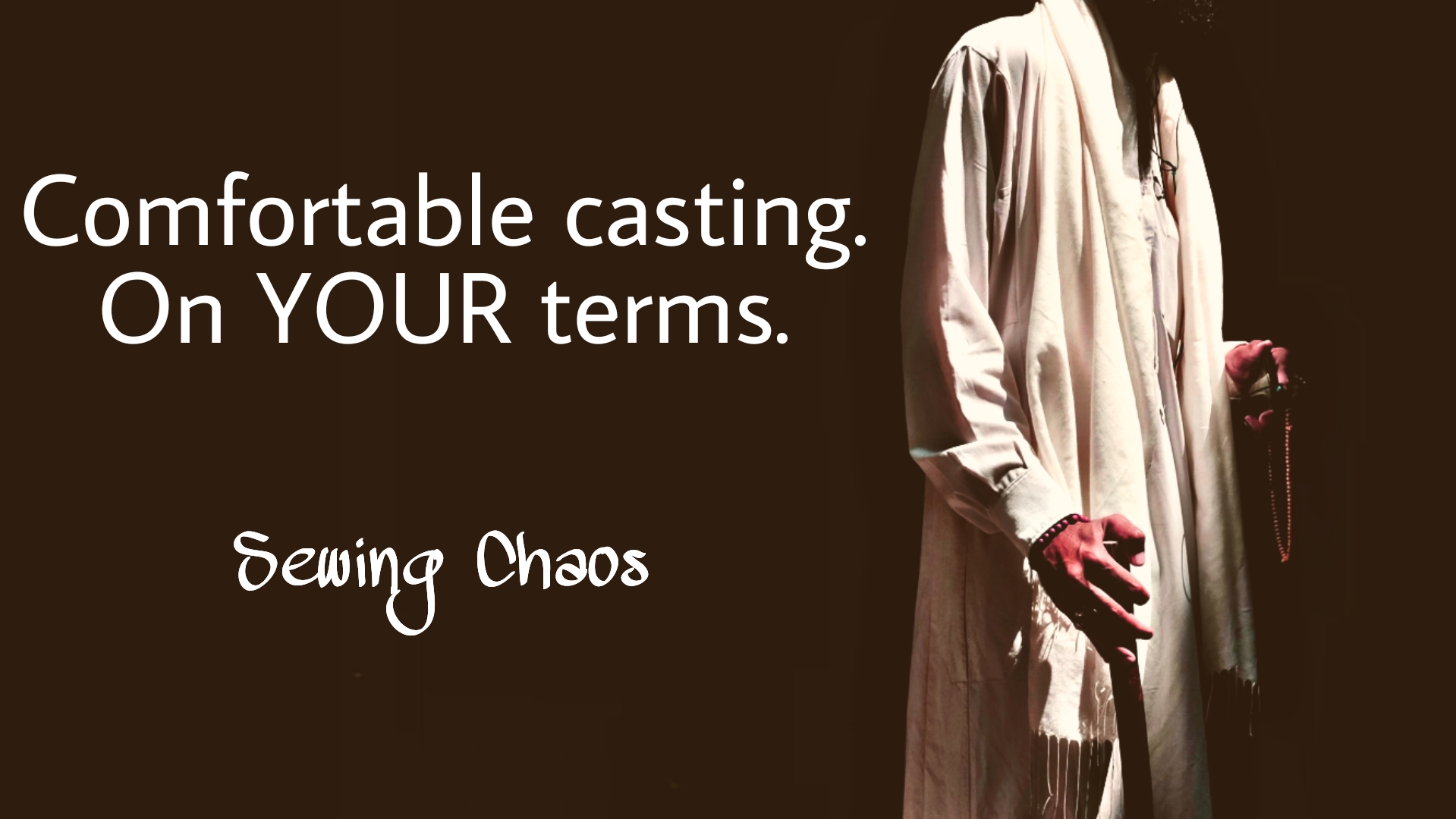 man holding brown stick by Ozan Safak (modified by Angela Biscup)
For those requiring more advanced protections, due to the nature of their activities or environment, Sewing Chaos provides options for personal protective gear tailored specifically to defend the wearer against accidental exposures to a variety of possible hazards. Tyrellium is a common addition in these options as defense against errant magic or even accidents. More advanced Threadmancy may be used to provide additional protections from exposure to hazardous alchemical reagents.   Uncommon materials are treated to allow for their use as fabrics with threadmancy, to allow the use of their unique properties as additional defense against an assortment of potential dangers. Higher end options may even include Anemancy to redirect airflows around the user, providing comfort in excessively hot or cold environments and even protections from immersion or combustion, although these options also require periodic attention to maintain the magicwork.

Sewing Chaos officially sells comfortable options for wearing beneath armor, typically padded articles of clothing utilizing special materials or even Anemancy to better direct airflow and sweat. These are made to provide resistance-free flexibility for the wearer, allowing for a full range of motion in combat situations as allowed by their outer armor choices.   Surprisingly they do not officially carry any armor product lines themselves, despite some rather lucrative offers they have received through the years. It is speculated that they may accept private contracts and many rumors circulate regarding potential clients, ranging from Malay's military to eccentric private businessmen to the elusive Shadows.   These are largely considered as conspiracy theories, despite the sudden disappearance of the occasional theorist, as most speculation has simply been ignored by the organization. They do provide Warbird under armor options to Malay's mounted 4th Battalion, free of charge, although this is largely considered a publicity stunt to advertise the comfort of their products. Warbirds never wear anything unwillingly, and are not afraid to draw blood or worse when voicing their discontent.
Type
Shop, Tailor
Parent Location
Malay 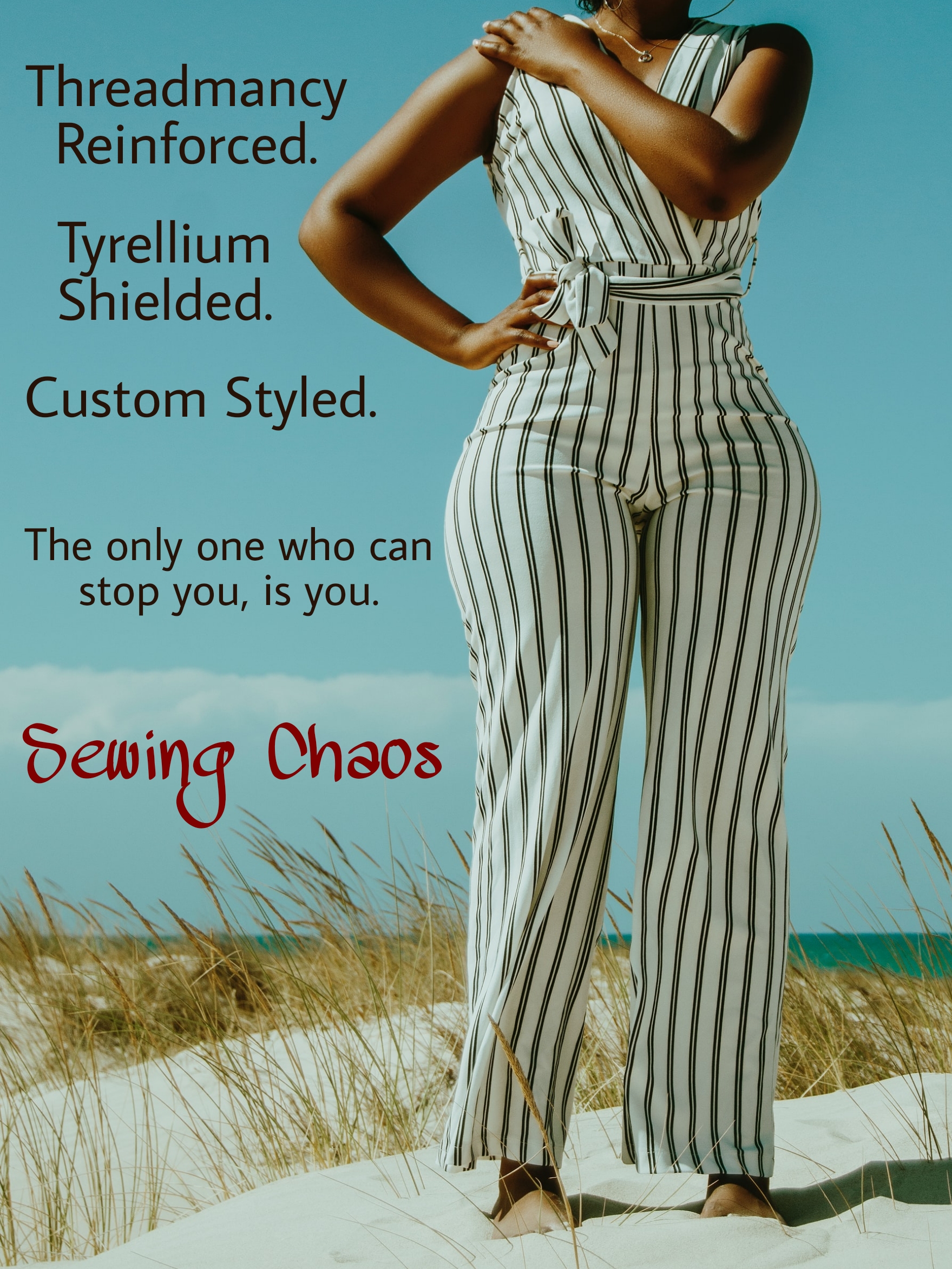 Sewing Chaos serves as the exclusive tailors of the Goldaming Family, supplying not only their protective lab wear but also their clothing for fieldwork and even much of their everyday wear. Due to the varied and intense nature of their magical research their personal protective requirements are some of the most demanding presented to Sewing Chaos. This has resultes in a mutually beneficial relationship, resulting in a wide array of specialized clothing.   Sewing Chaos has also diversified into additional safety equipment such as alchemical goggles and footwear, each with their own variety of defenses.

Threadmancy is the magical school of thread manipulation to alter key traits of a fabric or thread. Materials affected by threadmancy could be organic or inorganic, although inorganic threadmancy requires the material be crafted into threads first.

Tyrellium is a chemical element with the symbol Ty. It is a soft, malleable, and ductile metal with very high thermal and magical conductivity. A freshly exposed surface of pure tyrellium has a blue-green pearlescent coloration.

Join Fillimet Discord!
I strive to release new articles weekly. Follow my world to receive updates on new content. Thank You to those who encourage my writing.   All Content, including Artwork and Music, © ℗ 2019-2021 Copyright Angela Biscup (SolarCat02), unless otherwise stated. All Rights Reserved.
Fillimet Logo created by the talented Garrett Lewis, Commercial Commission. Instrumental Themes by Elias Alija under Commercial Commission, © ℗ 2020-2021.
Please don't send me submissions of any kind.
Cover image: Woman in Red Mesh Top by Fezbot2000

Always love to see more designer clothes and fashion! Especially when it comes to an interesting sort of fashionable protective gear! Shows how the world can be dangerous and how people have found ways to make themselves safer while also being culturally 'hip!'

Check out my worldbuilding in the Ethnis Universe!

Thank you! Ethnis does an awesome job with worldbuilding different cultures. I am trying to get better at some of the bits I don't touch so often - with an emphasis on the impacts of my magic technology. 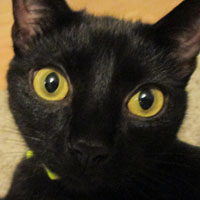 I love this article - all the interesting details about how Sewing Chaos makes their clothes, and the bit at the end about the warbirds too! :D I love the adverts you made too! <3

Thank you! The advertisements were my favorite part.